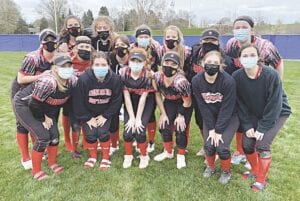 GRAND BLANC — Kendall Klochack delivered a brilliant performance in the circle on Monday, April 13, throwing a no-hitter to lead the Grand Blanc Bobcats past Clarkston 12-0 with Carson Kuhlman behind the plate.

Klochack allowed zero hits and zero runs over the five innings while striking out 11 and walking zero. The Bobcats secured the victory thanks to seven runs in the second inning.

The team really got things moving in the first inning, when Klochack doubled on a 1-1 count, scoring one run.

The offensive onslaught came from singles by Hoover, Kuhlmann, Martin, and DeWitt, doubles by Oetting and Klochack. Freshman Audrey Kranz had a big debut, hitting an out-of-the-park homerun in the fifth inning.

The Bobcats totaled 17 hits in the game. Kuhlmann, Oetting, Kranz, Annabelle Morningstar, Martin, and Klochack each managed multiple hits with Oetting and Kuhlmann each managing three hits to lead the Bobcat bats.

Morningstar in centerfield had a beautiful diving catch. Oetting had the patience of a senior leader as she waited for a high fly ball at first and caught it with ease.

The Bobcats grabbed an early lead, scored on a single by Oetting, a groundout by Klochack, a single by Kranz, and a home run by Anderson in the first inning. The Bobcats tallied six runs in the second inning.

The offensive onslaught came from singles by Kranz, Martin, Anderson, and Kuhlmann and a walk by Brooklyn Powell. Martin earned the win with Abby Perry behind the plate.

The pitcher went three innings, allowing four runs on four hits, striking out four and walking one. Sydney Long threw two innings in relief out of the bullpen with three strikeouts, one hit, and allowing one run.

Anderson also led with two stolen bases, as the Bobcats ran wild on the base paths with six stolen bases. Kuhlmann was strong at second base having many putouts while DeWitt made a perfect foul fly ball catch at third. — L.R.