Kmart longtime Miller Road closed permanently on Sunday after a two-month liquidation sale. Kmart began its final countdown on Nov. 30, offering progressively higher discounts down to its final day of operation on December 7.

FLINT TWP. — For 50 years, the Kmart discount department store anchored a large lot at G-3083 Miller Road. But sadly it closed its doors for good Sunday, after a flurry of bargain shoppers came to hunt among a few short aisles of remaining merchandise, marked 90 percent off, and moved to the front of the nearly empty store.

Opened in 1964, it was the oldest remaining Kmart store in Genesee County, second only to the Dort Highway store, which opened in 1963 and closed in 2013. A liquidation sale began in early October at the Miller Road store and the Kmart on Belsay Road in Burton after their parent company. Illinois-based Sears Holding Company listed them among five Michigan stores among about 100 nationwide.

Kmart has two remaining Kmarts in Genesee County in Fenton, at 18055 Silver Parkway opened in Vienna Township at 4920 W. Vienna Road. But financial analyst are not painting a rosy long-term future for Kmart or Sears stores to survive, especially in light of an announcement last week by Sears Holdings of plans to close 100 more stores by the end of year, bringing 2014 closures to a total of about 235 “underperforming” stores, most of them Kmarts, according to a press release. 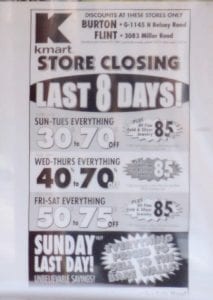 So far, the Sears store at Genesee Valley Center is not on the closing list.

In its heyday, Kmart operated as many as seven stores in the Flint area.

The Miller Road store had 81 employees.

On the upside, a DSW discount shoe store reportedly is planning to move into the former Border’s bookstore on Miller Road, according to Tracey Tucker, township economic enhancement director. Also in the last year, three new stores have opened in the former Circuit City store after it was subdivided. Plans also are underway to redevelop a former Miller Road car dealership into a restaurant and retail center.

So there’s hope for redevelopment of the 52,000 square-foot Kmart building with its prime Miller Road frontage.

“I have spoken with some interested investors but I have nothing solid yet,’’ Tucker said.