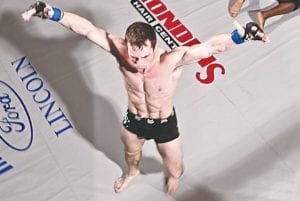 Almont native Sean Cooper will appear at the Polar Palace in one of the marquee fights.

LAPEER -– In an effort to provide local fighters with a platform to compete that was both safe and fair, Kombat Promotions started hosting shows in Lapeer County in 2011. Now, the promotion has grown to the point that it needs to start performing at bigger venues, making its upcoming amateur Mixed Martial Arts show at the Polar Palace on June 15 a night fans and fighters alike hopefully won’t soon forget.

“The fight card we have in place, we have some of the best teams in Michigan. We have quality fighters here. There are no street fighters. These are martial artists from very reknowned teams across the state,” said Kombat Promotions head trainer and co-owner Steve Lowe. “I think it’s important we emphasize on the quality roster we have. As for the promotional aspect, we’ve pumped a lot into this show.”

Headlining this 11-fight card titled Kombat Promotions VII are a pair of title bouts that includes Almont’s Sean Cooper, who’s fighting out of the Absolute Combat Club in Dryden, taking on Eddie Evans of the True Fighter Fight Team in Flint for the Featherweight (145 lbs.) championship.

“Sean Cooper is a collegiate-ranked wrestler out of Grand Valley State University. He has a multiple-year background in Tae Kwon Do and he has been training under me at Absolute Kombat Club for a year now in MMA,” Lowe said. “Eddie Evans has multiple fights and a winning record. He’s a very experienced fighter. Eddie trains under Kelly True.”

As for the Lightweight (155 lbs.) title match at the Polar Palace, Jerome “Ox” Otler of the True Fighter Fight Team is taking on North Branch native Chad Roge. Currently, Roge, who lives in Cadillac, trains at Titan MMA under the instruction of “Vicious” Vance Swerdan.

As a member of the United Shootfighting Alliance, Kombat Promotions is also featuring guest announcer Phil “The Voice” Davey on this card. Doors open at 7 p.m. and the show starts at 8 p.m.