KWA pipeline will be ready to go by summer 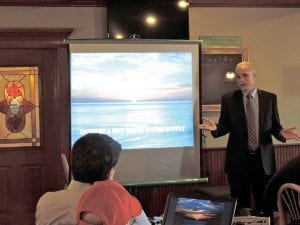 Drain Commissioner Jeff Wright talks about completion of the KWA water pipeline and its impact on the county future water costs and quality.

FLINT TWP. — Construction of the Karegnondi water pipeline from Lake Huron to Genesee County is on schedule and under budget, said Genesee County Drain Commissioner Jeff Wright in a presentation last week to the West Flint Business Association.

The project is 90 percent complete and expected to be finished in June, he said. Budgeted at $300 million, it is coming in under budget at about $284 million which is rare for a project of its size and a credit to the contractors working on it, Wright said.

Approaching completion after nearly two years under construction is good news for the City of Flint and its water woes but Wright said that the out-county must wait a bit longer to hook up. Flint has its own water treatment plant at Dort and Stewart but a separate treatment plant to serve the rest of the county will not be ready until 2017. Construction is expected to begin this spring near Marathon and Stanley Roads in Oregon Township. 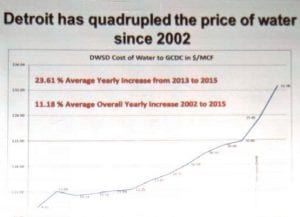 “KWA will be ready and able to serve water in June of this year,” Wright said of the pipeline for which the service area is Genesee, Lapeer and Sanilac counties.

Asked about cost savings, Wright said: “I am confident saying that Genesee County will have reduced costs of $400 million over the next 30 years.”

“(Then) Flint and Genesee Count will have, no doubt in my mind the lowest water rate in Michigan,’’ he said.

After the $284 million bond is paid off in 30 years, water rates can be dropped by 70 percent and those saving passed on to customers, if the municipality chooses to, he said, adding that he will actively be informing consumers that municipal rates are lower.

Tracey Tucker, Flint Township building director who was present at the WFBA meeting, said the township charges its customers at the county rate so whatever that is will automatically be passed on to residents and businesses.

The decision was made to build the KWA pipeline due to escalating costs of buying water from Detroit. Initial cost-saving projections for building the pipeline were based on an anticipated 5 percent rate increase of Detroit water but actually Detroit raised rates increased 11.3 percent to out-county customers when Flint left the system in 2014, Wright said.

The out-county never left the Detroit water supply. Wright said that Genesee County pays more for water than Oakland County, which has one of the highest median income levels in the nation. He said that when he became drain commissioner in 2001, Genesee County was paying about $8 million for Detroit water but now only 14 years later is paying $33 million for the same volume of water.

Wright also said contrary to widespread belief, there is nothing wrong with the Flint Water Treatment Plant. Flint’s poisoned water crisis was caused by the decision not to use corrosion control when the city switched back to using Flint River water in 2014. The high-lead problems are due to lead-ins and pipes in older houses, many of which are private property.

“That (Flint) plant is capable of handling the river water or the lake water,” he said, but added that lake water is easier and less expensive to treat and is not corrosive.

Wright also said he is studying research and may be looking at bringing a referendum to voters to remove fluoride from water. Fluoride is now widely available in mouthwash, toothpaste and other dental hygiene products, though it was deemed useful in preventing tooth decay when added to water years ago. The problem is that fluoride has a chemical reaction with chlorine also used to treat water which then requires the use of phosphates which is what creates corrosive water, he said.