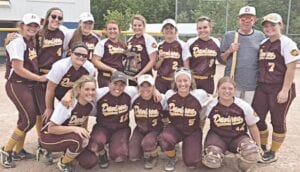 DAVISON — After riding a long winning streak into the postseason, the Davison Varsity Softball team saw its season come to an end in the MHSAA playoffs on Saturday.

Davison (29-9 overall, 16-6 in conference play) fell to Oxford, 1-0, in a pitcher’s duel in the division final. The Lady Cards reached the final by defeating Lapeer, 6-2, in the division semifinal on Saturday and upsetting #2 ranked Grand Blanc, 2-1, in the first round last Tuesday.

Gutting through a tough 4-6 start to the season, Davison won 25 of its last 28 games and rode an 11-game winning streak into the division final against Oxford. Head Coach Brad Brown credited his team for displaying resiliency and a strong work ethic throughout the season.

“We have a very good, close-knit group and a lot of leaders on our team,” he said. “The girls always showed up early for 6 a.m. workouts and stayed late for batting practice at night. Their focus was great, not only in games but also in practice too.”

“Chloe has been a home run hitter for us all year long and has done a tremendous job,” Brown said. “She can connect on pitches from anywhere around the plate and hit with power.”

Anderson, Davison’s ace pitcher, won a record 23 games for the Lady Cards with over 200 strikeouts, while also batting over .400 for the season with three home runs and 34 RBIs. Brown described Anderson as a super-accurate pitcher who bewildered batters with a nasty screwball and effective fastballs and curveballs all season long.

McCleod, who played third base, broke the school record for doubles with 16. She also hit seven home runs and led the team in batting average and hits.

“Our team just played extremely hard, and our players led by example,” Brown said. “We peaked at just the right time this year and finished strong. We’re hoping for even bigger things next year.”