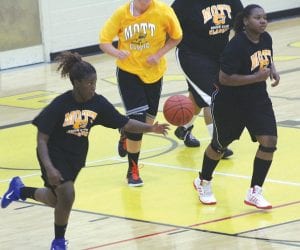 Kapri Thompson takes control of the ball to start a fast break by the Black team during last Thursday’s game at Mott Community College.

FLINT — Kapri Thompson isn’t sure where she’ll play her college basketball yet, but the Carman- Ainsworth graduate got a taste of Mott Community College hoops last week.

Thompson played in the Bruin Club All-Star Classic at Ballenger Field House last Thursday, helping the Black team rally from a 16-point second half deficit before it eventually fell to the Gold team, 72-70. The annual game brings together some of the area’s top graduated seniors and benefits Mott student-athletes through the school’s booster club.

Thompson is being recruited by Mott, but also is considering walking on at Eastern Michigan University.

Thompson had two points in the game and also dished out a big assist during the Black team’s rally. The Gold led, 33-30, at halftime and stretched that to 56-40 in the first seven minutes of the second half.

The Black squad cut that deficit to 65-60 by the four-minute mark and tied it, 70-70, on a three-pointer by Cassidy Wright of Flint Northwestern with 8.4 seconds left. But the Gold team won it on a layup by Holly’s Jessica Beeler with four-tenths of a second showing on the clock. Beeler originally was on the Black roster, but moved over to the Gold team to even up the sides.

No scorebook or statistics were kept on the game. Wright was named Most Valuable Player of the Black team, while Emily Wendling of Flushing was named MVP of the Gold squad.

Some of the players in the game will play for Mott next year, and Lady Bears coach Letitia Hughley would like to add Thompson to the list.

“She’s a scorer and she can handle the ball,” said Hughley. “She can play the 1 or the 2, and any time you can get a combo player, that’s a good thing.”

For the 20th consecutive season, the Mott Community College Bruin Club held its annual Bruin Classic basketball games last Thursday. Although the Gold team jumped out to a comfortable lead early on, including a 12-point edge early in the second half, the Black squad mounted a comeback to take the 87-78 victory.

No kids from Lapeer County made it onto the boys’ roster this year, however, Grand Blanc’s Clarence Turner suited up for the Gold team, while Davison’s Lance Arnold and Swartz Creek’s Jarod Jones hit the court for the Black squad.

The Gold team was in complete control in the early moments, which led to a 32- 15 lead with less than seven minutes remaining in the first half. The Black team would roll right back into the game, however, as three-pointers from Flint Beecher’s Antuan Burks and Flint Northern’s Darius Toins gave the Gold team a little breathing room before the half, 44-38.

The Black squad continued to chip away at the lead and when Fenton’s Dylan Hickoff hit a three-pointer with less than seven minutes remaining in regulation, it granted the Black team its first lead of the game. Burks was named MVP of the Gold squad by dropping in 23 points on the night, and aside from that particular figure, official statistics were not taken.