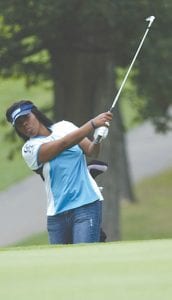 Selena Johnson has rounded her game into championship form.

In just her second year of playing the game, Johnson won the third-flight title in the FJGA’s season-ending tournament. She edged Devon Perry, 2 and 1, in the semifinals on Aug. 9, then beat Katlyn Marra by the same score in the Aug. 10 finals at Swartz Creek Golf Course.

It was a remarkable achievement for someone who played her first year of high school golf only last fall at Carman.

“She’s really made a lot of improvement along the way,” said Carman- Ainsworth coach Bob Blaylock. “She has really taken a liking to the game. Her dad’s helping her out, and she’s playing more golf now.”

Borgerding, who will be a sophomore for the Lady Cavs this fall, lost her semifinal match to Tailor Przybylowicz, 2-up, on Aug. 9 at Swartz Creek Golf Course. Przybylowicz went on to play 20 holes in the championship finals before losing to Alex Mattis.