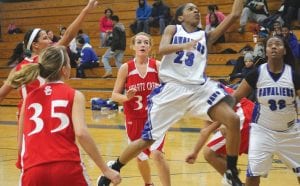 Angel Proby (23) drives for a layup in last Thursday’s win over Swartz Creek.

HARTLAND — Carman- Ainsworth dropped a 54-46 decision to Hartland in a non-league girls’ basketball game Tuesday night at Hartland. The host Eagles put it away with 17-of-19 free-throw shooting in the fourth quarter.

Carman-Ainsworth earned its first win of the season last Thursday, beating Swartz Creek, 58-34, in a non-league game at home.

The Cavaliers jumped on the Dragons from the start, taking a 12-4 first-quarter lead and holding Creek without a field goal for the first 5:44 of the game. Carman-Ainsworth forced 21 turnovers for the game and rattled the Dragons into countless missed layups.

The lead grew to 29-10 by halftime and 45-21 entering the fourth quarter. The teams played to a 13-13 deadlock in the final stanza. Tomlin and Ashley Hall scored 16 points apiece, as 11 different Lady Cavs got in the scoring column. Aneeya Allen had seven points and Angel Proby scored six.

The Cavs are playing their first season in the Saginaw Valley League, which will add some variety to the schedule. They’re still competing with former Big Nine rivals Flushing, Davison and Flint Powers in the new circuit, but now they play Flint schools Northern, Northwestern and Southwestern twice a year as well. That’s the entire South Division of the Saginaw Valley.

“It brings a different level of excitement,” said Vaughn. “We don’t have to play the same people all the time. It’s pretty exciting. Maybe it will bring more people to the stands.”

Carman-Ainsworth prepared for its league season with three tough non-league games, against Grand Blanc, Swartz Creek and Hartland. The Cavs will begin Valley play Dec. 14 against Flushing at home.