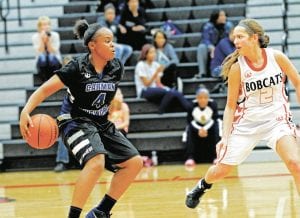 Carman- Ainsworth’s Nakia Earley, here playing in a December game, had eight points, including a 3-pointer, to give the Lady Cavs the halftime lead in last Friday’s win at Lapeer.

Destiny Strother scored 17 points on five 3-pointers and Harmany Williams added 12 points as the Lady Cavs improved to 9-4 overall and climbed into a second-place tie with Lapeer at 4-2 in the league. They trail Powers Catholic by one game.

Carman-Ainsworth lost to Lapeer 66-60 on Dec. 15 to fall to 0-2 in the SVL-South but has won four straight league games since.

The Lady Cavs fell behind in this one, 10-7 after one quarter, but took a 25-23 halftime lead on Nakiya Earley’s 3-pointer to close the second quarter.

Carman-Ainsworth then ran off the first 11 points of the third quarter, four each by Williams and Shakara Johnson, to take a 36-23 command. Lapeer ended the quarter with a 3-pointer to get within 36-26 but the Cavs stayed with the Lightning through a high-scoring fourth period.

Earley finished with eight points and Johnson had 11 rebounds to go with six points.

Carman-Ainsworth will visit Powers on Friday with a chance to tie the Chargers for first place. The Lady Cavs beat the Chargers 58-41 on Jan. 15.