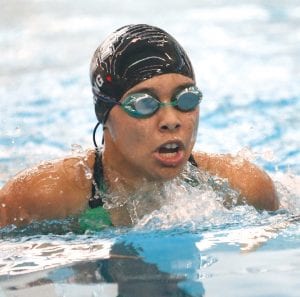 FENTON — Amidst a 10-team field, the Carman-Ainsworth/Flushing co-op varsity swim and dive team competed at the Genesee County Meet last Saturday, placing ninth with 107 points. Winning the event with a score of 567 was Grand Blanc, picking up its fifth straight title, while Fenton was second with 359 points and finishing third at 223.5 was Holly. Coming in fourth for the event was the combined team from Lapeer East and Lapeer West with a score of 214.5, Brandon was fifth with 210 and Kearsley/Clio grabbed the sixth spot with 161.5 points. That just left Davison, Powers and Swartz Creek in spots seven, eight and 10 with scores of 151.5, 114 and 66, respectively.

Standing tall for the Lady Cavaliers in seventh place in the 200 medley relay was Rebecca Hrit, Ashley King, Mara Johnson and Andrea Bade, Jenniffer Messina came in sixth in the diving competition with 13 points and taking the seventh spot in the 200 free relay was Courtney Glinka, McKenzie Bartlett, Mara Johnson and Allia Howard.

In the 100 breaststroke it was Ashley King who took the eighth position in 1:22.31 and placing eighth in the 400 free relay was Glinka, Bartlett, Bade and Howard.

Overall, it was Lapeer’s Emily Shallman who ended the day as the individual high points scorer, setting two new pool and meet records along with two first place finishes and a pair of state meet qualifying times in the 100 fly and 200 IM.

In non conference competition, Carman- Ainsworth/Flushing made the trek over to Corunna on Tuesday, falling to the undefeated Cavaliers, 114-71.