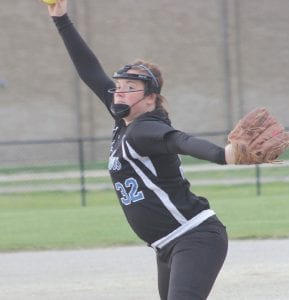 Carman-Ainsworth’s Keri Crane winds up for a pitch against Imlay City.

Kinterra Tomlin singled and eventually scored in the first inning of the opener, but Imlay City was already up, 5-0, by that time. Keri Crane relieved in the second inning and held the Spartans to one run over the next three frames, but Imlay City tacked on five more runs over the last three innings.

The Cavs fell into a 4-0 hole in the first inning of the nightcap, and Imlay City invoked the 10-run mercy rule in the fifth inning.