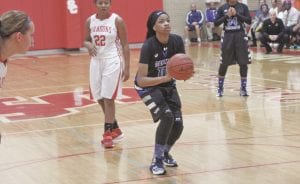 GRAND BLANC — The Lady Cavs eked out a one-point win, 41-40 over Grand Blanc on Tuesday.

Carman-Ainsworth led 13-9 after one and 23-19 at the half. The momentum stayed in Carman-Ainsworth’s favor 31-27 at the end of the third and even though Grand Blanc outscored the Cavs in the fourth 13-10, Carman-Ainsworth had done just enough to preserve the win.

Carman-Ainsworth put Creek into an early hole with an 18-8 first quarter and outscored its hosts 17-10 in the second to go into halftime with a comfortable 33-18 lead. The break did little to cool off Carman- Ainsworth, which put up an eye popping 28 points to Creek’s five in the third. Both teams put on the brakes in the fourth with Carman- Ainsworth outscoring Creek 4-3. – L.P.