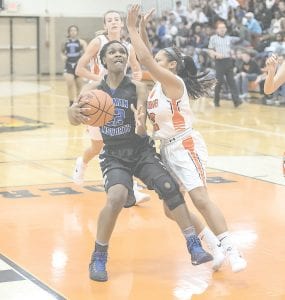 Carman-Ainsworth’s Bless Calhoun forces her way into the paint against Flushing on Nov. 28.

The Lady Cavs snagged a narrow 7-5 lead in the opening quarter and added a 10-6 second to lead 17-11 by halftime. Midand Dow tried to mount a comeback in the third, outscoring Carman-Ainsworth 16-12, but Carman- Ainsworth put a stopped on that with a 16-10 fourth to hold on to the win.

Destriny Strother set the pace for the Lady Cavs, putting up 19 points. Chenelle King chipped in with 12 and Jessiana Aaron added nine.

Carman-Ainsworth faces a tough test on Friday when it hosts an undefeated Bay City Western. The Lady Cavs will then host Lapeer on Tuesday. 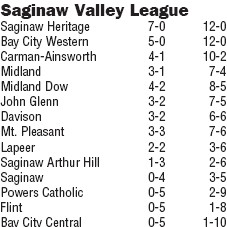