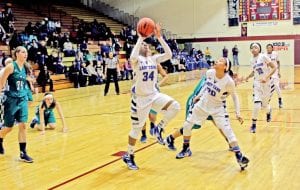 The Lady Cavs went into the game with their best regular-season record (15-5) in at least a decade but were facing a St. Johns team that was 18-3 after blowing out winless Owosso 52-18 in Monday’s opening game. Wednesday’s contest was played after View deadlines.

The other semifinal had ninth-ranked Flushing (18-2) meeting Swartz Creek (10-9). The district final is set for 7 p.m. Friday.

Carman-Ainsworth also was coming off the first girls’ basketball conference championship in school history with an 8-2 record in the Saginaw Valley League-South Division. The Cavs then met SVLNorth champion Saginaw Heritage in a crossover game for the overall SVL title last Friday at Davison, and that was an eye-opener.

The Hawks looked every bit like the No. 2-ranked team that they are and beat Carman-Ainsworth 64-35. It was 24-9 after one quarter, and although the Cavs battled back in the second quarter on three 3-pointers by Destiny Strother, they still fell further behind, 41-22, by halftime. It was 57-29 going into the fourth quarter.

Heritage ended the regular season at 19-1, its only loss coming against a No. 3-ranked Midland Dow team that the Hawks could meet again in the Mount Pleasant district final this week. The winner of that district goes to the same regional as the St. Johns district champ.