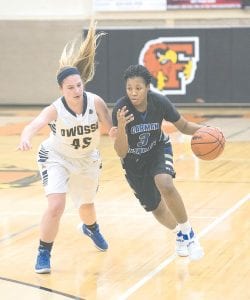 Carman-Ainsworth’s Destiny Strother was limited to six points against Flushing in the district final at Flushing last Friday.

FLUSHING – The Carman- Ainsworth girls’ basketball season came to an end in the Class A district finals on Friday with a 50-39 loss to Flushing.

Flushing led by one point, 13-12, after the first quarter and increased its lead to 24-17 by halftime. Carman- Ainsworth fought hard and put up a 9-8 third but Flushing answered with an 18-13 final stanza.

Chenelle King had 18 points, Xeryia Tartt had 12 and Destiny Strothers was limited to seven. Jessiana Aaron chipped in with two.

Flushing’s Lauren Newman had 17 points and hit 11-of-11 from the charity stripe. Shelby Morrow reached double figures with 15. Flushing moved on to the Class A regional at Mt. Pleasant’s south site Tuesday to play Lapeer.

Carman-Ainsworth surged out to a 23-6 first-quarter lead and never looked back. Both teams scored eight in the second quarter and Carman- Ainsworth outscored Owosso 17-6 and 17-3 in the final two quarters. No player stats were available.