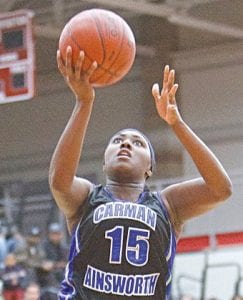 Carman-Ainsworth’s Montreca Mull (15) goes up for a layup against Grand Blanc on Tuesday.

The Lady Cavaliers got off to a slow start, scoring just five points in the first quarter, and couldn’t catch the Bobcats. They trailed, 9-5, after the first period and 22-15 at halftime.

Hall scored 13 of her points in the second half, including nine in the third quarter. But Carman-Ainsworth was still outscored in the period, 13-12, to fall behind, 35-27, going into the final eight minutes. Grand Blanc put it away with a 10-7 final quarter.

The Cavs had trouble stopping Grand Blanc senior Kara Puidokas, who muscled inside for a game-high 23 points and 10 rebounds. Taylor Garner added 11 points for the Bobcats.

Kinterra Tomlin scored six points for Carman-Ainsworth. The Cavs will play their home opener at 7 p.m. tonight against Swartz Creek, then visit Hartland next Tuesday.