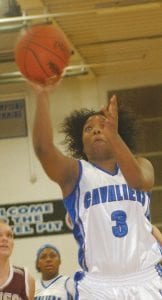 FLINT TWP. — The Lady Cavaliers went into their basketball game against Flushing last Friday with a big piece of their artillery missing, and the results were predictable.

Carman-Ainsworth dropped a 69-41 decision to the Lady Raiders and effectively fell out of the Big Nine Conference race at 1-3 with two games to go. The Cavs are 7-9 overall, still a marked improvement over the past two seasons.

Carman was missing Jasmine Boyd, who had 21 points and 12 rebounds in the Cavs’ previous league game against Davison. The senior forward was out of town for last Friday’s contest, coach Johnese Vaughn said.

Carman had lost to the Lady Raiders by 12 points in its first meeting Jan. 14, but this one was essentially over by halftime. Flushing jumped out to a 24-7 first-quarter lead and extended it to 42-14 with an 18-7 second period. The second half was even, with Carman winning the third quarter, 16-15, and Flushing taking the finale, 12-11. 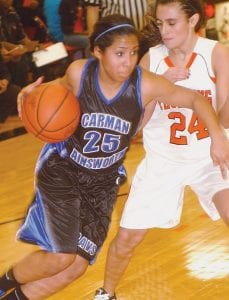 The Lady Cavs were balanced in scoring, with all nine players getting into the book. Tiara Gooch led with eight points, Kapri Thompson and Aliah Stinnett scored six each, and Kinterra Tomlin, Brandi Rimmer, Ashley Hall and Tierra Mitchell chipped in four apiece.

Carman will host Flint Powers Catholic in another Big Nine game tomorrow. The Lady Cavs will be trying to avenge a 46-45 loss to the Lady Chargers on Jan. 21.