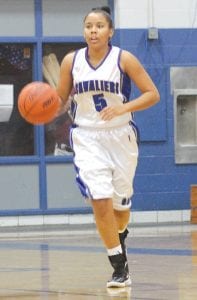 The Lady Cavs hung with Clarkston for the first half, tying the Lady Wolves, 17-17, in the first quarter and trailing by just 32-27 at intermission. But Clarkston pulled away with a 20-11 third quarter and a 22-11 fourth.

Carman-Ainsworth also started strong in the Saginaw Valley League crossover game at Midland Dow. The Cavs were within 15-13 after one period, but an 11-0 second quarter by Dow dropped Carman-Ainsworth into a 26-13 halftime hole. The Chargers pulled further away with a 14-7 third period to make it 40-20 and withstood the Cavs’ 15-7 rally in the fourth.

Hall had 12 points and Stinnett six. Tomlin added five, while Purches and Natalia Kincaid had four each. 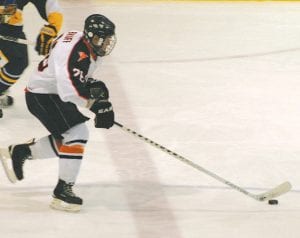 Flushing/Carman-Ainsworth’s Cameron Bruff flies through the neutral zone during Saturday’s win over Goodrich.

FLINT TWP — The last time the Flushing/Carman-Ainsworth and Goodrich hockey teams met, the score wasn’t even close. In an early season match-up, the Raiders walked all over the Martians in a 10-0 win. It was a bit closer this time around, but Flushing still came out on the right side of a 6-3 contest at Iceland Arena on Saturday.

The Raiders’ first period was strong, as they seemed to score at will each time down the ice. Sam Berry would be the first to light the lamp on an assist from Cameron Bruff, followed by Garrett Schafsnitz setting up Jordy Makranyi’s tally for a 2-0 edge. Schafsnitz was back in the assists column on Flushing’s next goal when Wesley Livingston fired it home.

Jeff Fisher would ripple the mesh, as well, coming off of a feed from Makranyi, before Bruff scored an unassisted goal. Joey Montpas put an end to the scoring, tallying for Flushing’s sixth goal of the game. Montpas was assisted by both Schafsnitz and Makranyi. Hayden Smith stood tall between the pipes with over 20 saves.

“Well, the kids are improving every day,” said coach Ben Guzak. “That’s one of the points of emphasis that I try to get across to my programs to try to get better every day and improved throughout the year. They’re buying into that philosophy and they’re really hard workers.”