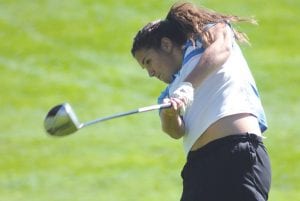 Meghan Borgerding blasts a drive off the No. 10 tee at Lapeer Country Club.

FLINT TOWNSHIP— Carman- Ainsworth opened their girls’ golf dual meet season on Tuesday with a loss to non-league opponent Lapeer East. The Cavaliers battled, but could not overcome the Eagles in a 193-215 defeat. Meghan Borgerding led the way for Carman-Ainsworth by shooting a 46, while Selena Johnson finished the day with a 54.

Taylor Talbert accumulated a score of 57, which was just good enough to edge out teammate Mikaila Garrison, who shot a 58. Audrey Fleming and Sierra Woodcum topped the East scorecard with each tallying a 45. Abby Kanasty recorded a 51 for the Eagles, as well.

The Carman-Ainsworth girls’ golf team traveled to the annual Lapeer TuneUp on Friday, which generally has an extremely high level of talent competing in the field. The Lady Cavs finished the day in 18th place with a total of 451.

Borgerding was the highest finishing Cavalier on the day, accumulating a score of 105. Morgan Genore followed behind her at 112, while Talbert chipped her way to a 116. Garrison mustered up a 118, and Johnson wrapped up the Cavs’ effort with a 120.

The Lady Cavs will be back on the course on Friday at the Bay City Tournament.