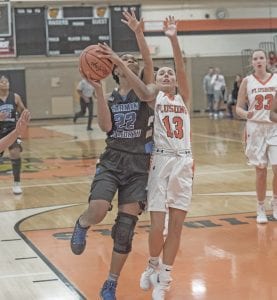 FLINT TWP. – The Carman- Ainsworth girls’ basketball team will head into a newly restructured Saginaw Valley League looking to dominate once more. The SVL will no longer have a North and South division, but will instead be one large division with all SVL teams facing each other.

The Cavaliers finished last season out at 18-4 overall and 8-0 in the SVL-South. Carman-Ainsworth’s only losses were a pair to the would-be state champions Flushing and another pair to Saginaw Heritage, which was ranked No. 1 in Class A all season.

“There is no more Saginaw Valley South and North, this year it is all one big league so we will be traveling a lot more, but we are excited to be playing the North because there are some really good teams up there,” Belill added. “Traditionally, they have been the better league, but we are excited this year to be all in one league and show what we can do throughout a whole season.”

Carman-Ainsworth opened the season against Flushing on Tuesday and will host Swartz Creek on Friday at 7 p.m.