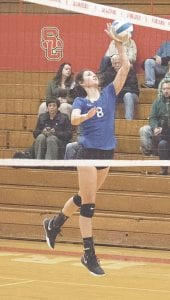 “I am very proud of my girls and how hard they worked all season,” said Carman-Ainsworth coach Misty Hubbard. “They never gave up and always worked to improve in all aspects of their game.”

Last Thursday, Flushing defeated Swartz Creek in the district championship 3-0. Flushing moved on to regional play against Grand Blanc Tuesday night at Fenton as part of the Mt. Pleasant regional.