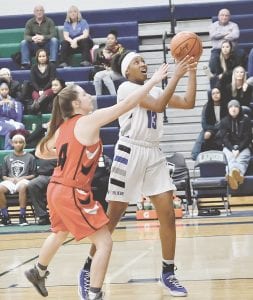 LAPEER — Carman- Ainsworth crushed any hopes that the Grand Blanc girls’ basketball team had of moving in the district tournament when it soundly thumped the Bobcats 56-18 in the district opener Monday.

Grand Blanc (15-6) found itself in a deep hole falling behind 12-2 after the first quarter. Carman- Ainsworth (16-5) outscored Grand Blanc 13-6 in the second to lead 25-8 by halftime. A huge third quarter saw Carman- Ainsworth outscore Grand Blanc 24-6. Only in the fourth was Grand Blanc allowed to take an advantage, 8-5, but the game was well out of reach by then.

Carman-Ainsworth was led by Destiny Strother with 16 points and Chenelle King had 11. Aaliyah McQueen had nine points and 11 rebounds and Jasia Caldwell had seven points and 14 rebounds.

Carman-Ainsworth played Flint in yesterday’s semifinal and Lapeer (6-14) faced off with Kearsley (17-4), which beat Davison 57-55 in the district opener. – L.P.

The Cavaliers closed out the regular-season with a 71-64 loss to Detroit Edison last Thursday.

Carman-Ainsworth took the first quarter, 21-18, but Edison fought back in the second 18-9 to close the gap. Edison then outsored the Cavs 19-17 in the third. Carman-Ainsworth clawed until the end but was outscored 17-16.

Strother led the Lady Cavs with 29 points and McQueen had 21.