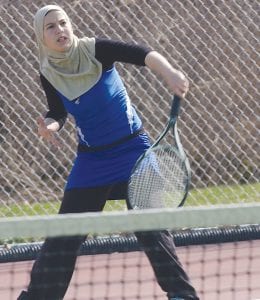 Carman-Ainsworth’s Mariam Salman returns the volley at the No. 2 singles position.

MIDLAND – They knew the competition would be stiff, but this was ridiculous.

The Carman-Ainsworth girls’ tennis team could only watch from the sidelines as Midland Dow defended its regional title last Thursday, earning 30 points and placing first at the Div. 1 regional hosted by Saginaw Heritage. The event was moved indoors to the Midland Tennis Center because of the threat of rain.

The change of venue did little to unseat the top dogs, with Grand Blanc placing second for the second year with 21 points, also moving on to the state meet on June 4. Flushing placed a distant third and did not earn the required 18 points to move on. Teams had to win the regional, place second or earn 18 points, while the winner and runner up at No. 1 Singles got an automatic berth.