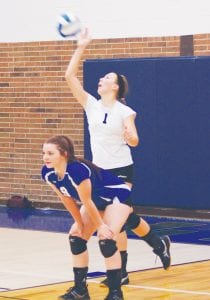 Carman-Ainsworth’s Sarah Thurston (1) serves while Korbin Brandon (9) croutches down in preparation for the return.

SWARTZ CREEK — Throughout the season, the Carman-Ainsworth girls’ volleyball squad has shown quite a bit of improvement and has proven that it can hang with some of the top teams in the area. At 14-26-1 overall, the Cavaliers have seen their fair share of ups and downs, but come Monday, it’s win or go home.

The Carman-Ainsworth roster is quite deep and has received contributions across the board. Deja Lester, Korbin Brandon, Sydney Cunningham, Hailey Fyfe and Sarah Thurston have been key to the Cavs’ success. It doesn’t end there, though, as Eriona Chambers, Ally Dittenber, Che’Anne Hicks, Morgan Sherrer, Jessica Smith and Katie Speaks have all chipped in this season.

Carman-Ainsworth will open district play on Monday with a match up against Davison at Swartz Creek. The winner will advance to play Creek in the semifinal on Wednesday. After both drawing first-round byes, Lapeer and Kearsley will meet in the other semifinal and the district championship game will take place on Thursday at 7 p.m. 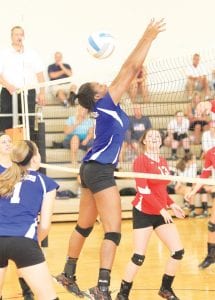 Chambers posted 19 kills and 10 blocks while Hicks added 20 kills, six blocks and 23 digs. Smith recorded 35 kills and 52 digs and Thurston had a triple-double with 14 aces, 78 assists and 29 digs.

The Cavaliers will host their own Invitational on Saturday before embarking on their playoff journey next week.