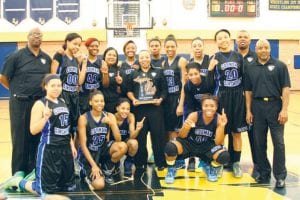 Carman-Ainsworth had split two Saginaw Valley League- South Division games with Flushing this season, winning by two points in December and losing by 22 in January. The Cavs took an 11-7 lead in the first quarter of the rubber game, but Flushing rallied with a 16-7 second period and a 12-10 third to take a 35-28 lead into the final eight minutes. Carman-Ainsworth then erupted for a 19-5 domination in the fourth to pull out the win.

Carman-Ainsworth had to battle for the district title last Friday at Lapeer West, edging Davison 48-42 in the final on Friday. The Cavs took a 15-8 first-quarter lead, but Davison cut it to 22-21 by halftime. Carman-Ainsworth widened the gap to 35-29 in the third quarter and held on through a 13-13 fourth. McDonald had 21 points, Stinnett scored nine and Proby had eight.

The winner of tonight’s regional final advances to a quarterfinal game Tuesday at Mount Pleasant against either Lakeland or Canton.