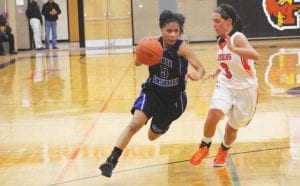 FENTON – Carman-Ainsworth stepped outside of league play Tuesday night to visit Fenton and beat the Tigers 55-31 in a non-league girls’ basketball game.

Carman-Ainsworth took immediate control with a 19-6 first-quarter lead and led 24-12 at halftime. It was 40-22 going into the fourth quarter.

Last Friday, McDonald scored 35 points, her highest total since the season opener, and Carman-Ainsworth held off Davison 62-54 in a Saginaw Valley League-South game at Davison.

The Lady Cavs will conclude the regular season tonight with a league crossover game against Midland at home.

Carman-Ainsworth will open Class A state tournament play at 7 p.m. Monday with a district game against Swartz Creek at Flint Kearsley. The winner willplayLapeerina6p.m.semifinalon Wednesday, while Davison and Kearsley meet in the other semifinal at 7:30. The district final will be at 7 p.m. Friday, March 6.

The champion will advance to a regional semifinal at 7 p.m. March 10 at Flushing against the Owosso district winner.

Carman-Ainsworth shook off the effects of a double-overtime loss just four days earlier and beat Fenton 55-46 in a non-league boys’ basketball game Tuesday night at the Gravel Pit.

The Cavaliers took an 11-6 first-quarter lead in a battle that would be close throughout. They led 24-19 at halftime and edged away slightly in the third quarter with a 13-9 effort that made it 37-28 going into the final eight minutes. The margin held through an 18-18 fourth quarter.

Last Friday, the Cavs took Davison into double overtime before losing 61-55 in a Saginaw Valley League- South game at Davison. Carman- Ainsworth erased a 24-19 halftime deficit with a 15-9 third quarter but went into overtime tied 46-46. A 3-3 overtime forced a second extra session, which Davison won 12-6.