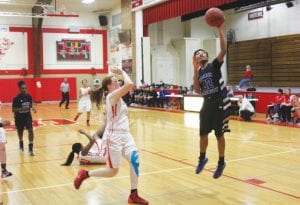 Carman- Ainsworth’s Chelsey Carpenter puts up a shot during a game last month.

OWOSSO – Carman-Ainsworth had little trouble winning a non-league girls’ basketball game at Owosso on Tuesday night, but the focus quickly shifted to this weekend for the Lady Cavs after the game.

Carman-Ainsworth beat Owosso 53-13 to post its fifth win in six games and improve to 8-3 for the season. But the Lady Cavs had to get right back to work to prepare for a key Saginaw Valley League-South game against Lapeer on Friday at home.

“We had a very balanced scoring attack and played great defense at Owosso,” said Carman-Ainsworth coach Lance Belill. “We take on Lapeer this Friday, who beat us earlier this season.”

The victory was the Lady Cavs’ fourth in five games and lifted them to 3-2 in the Saginaw Valley League-South Division. They are in third place, behind Powers Catholic (5-1) and Lapeer (4-1).