Lady Cavaliers shut out by Lapeer 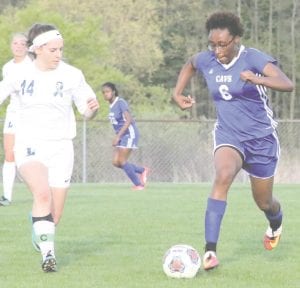 Carman-Ainsworth’s Destinee Lester takes control of the ball against Lapeer on Monday.

LAPEER – The Carman-Ainsworth soccer team swallowed an 8-0 loss against Lapeer on Monday. Crista Young was in net for the Cavaliers. The two schools came together to remember recently passed and former Lapeer coach Bud Rowley. Carman-Ainsworth, along with Lapeer, presented the family with flowers and past coaches made speeches honoring Coach Rowley.

On Thursday, Carman-Ainsworth was defeated 4-2 by Corunna. Brittany Young and Destinee Lester had a goal each. La’Angel Eubanks recorded eight saves in net.

Last Wednesday, Carman-Ainsworth was shut out 8-0 by Saginaw Heritage.

Carman-Ainsworth hosts Flint Powers today and is at Montrose on Monday. – K.R.