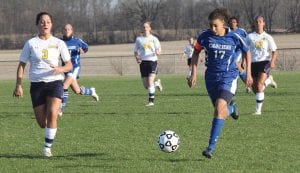 Carman-Ainsworth’s Shelby Marsh (17) rushes down field with the ball against Lapeer West at West on Monday.

LAPEER — In a non-league battle at home on Tuesday, the Lapeer West girls’ soccer team put forth one of its most impressive performances thus far, trouncing Carman-Ainsworth, 7- 1.

Savannah King led her squad by accumulating three goals and Shannon Brown added to the effort with a pair of goals. Jules Reinhardt and Jamie Patten chipped in with a goal apiece, both scoring their first goals of the year.

For much of the contest, Carman- Ainsworth was turned back at midfield and had to step up its defense against the potent Lapeer West offensive pressure.

The Cavaliers were at Flint Northern yesterday afer deadline and host Flushing on Monday. 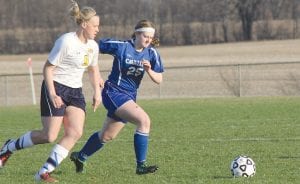