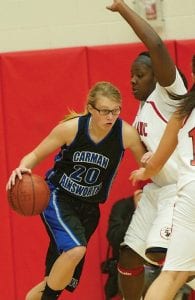 The Lady Cavaliers got off to a great start Monday night with a 60-52 victory at Lapeer West. They came back less than 24 hours later on Tuesday night and battled Grand Blanc to the end before dropping a 50-48 decision on the Lady Bobcats’ court.

It’s a different Carman-Ainsworth team than the one that won only three games last year, got blown out in several others, and finished the season with eight players.

“The difference this year, in addition to having more players, is we’ve got more stamina,” said Lady Cavs coach Johnese Vaughn. “Our conditioning efforts have really paid off and our girls have worked really hard. We wanted to be able to go four quarters, because last year we’d come out for the second half and have no more gas.”

Vaughn is putting that conditioning to the test in the early going. The Lady Cavs will play their third game in four days tonight with their home opener against Swartz Creek.

It paid off Monday, when Carman- Ainsworth outscored West, 21-13, in the fourth quarter to win the season opener. Ashley Hall had 17 points and six steals, while junior Kapri Thompson added 11 points as all 11 Lady Cavs played and 10 scored. Their 12th player was not available after having dental work that day.

Carman-Ainsworth used its defensive quickness to force 39 turnovers and dominate the backboards with 31 rebounds. The Lady Cavs also hung with the Lady Panthers in a free-throw shooting contest, hitting 22 of 36 freebies to West’s 26 of 37.

With all the fouls and their game-long defensive pressure, Vaughn made full use of her entire bench. Jasmine Jones scored nine points, Brandi Rimmer and Sarah Satkowiak had six points each, and Jasmine Boyd had nine rebounds, six steals and three assists.

“I told them before, we’re going to need everybody,” said Vaughn. “Everybody plays a role and they all add value. Because of the pressure we’re running, we need every body.”

The game was close throughout, with neither team leading by more than three points at the end of any quarter. Carman- Ainsworth had a 9-6 lead after one period and a 22-19 edge at halftime. The Lady Cavs were still up, 34-33, after three quarters, but fell behind, 37-36, 90 seconds into the fourth.

Grand Blanc went ahead for good, 47- 46, with 53 seconds left, and Carman- Ainsworth missed a shot and two free throws in the final three seconds. Thompson intentionally missed the second free throw, and Rimmer couldn’t quite tip it in at the buzzer.

Fouls hurt the Lady Cavs this time, as Grand Blanc hit 22 of 29 free throws to Carman-Ainsworth’s 8 of 11. The Lady Cavs made 19 field goals to Grand Blanc’s 14.

Tierra Mitchell added eight points and Boyd had seven for the Lady Cavs.