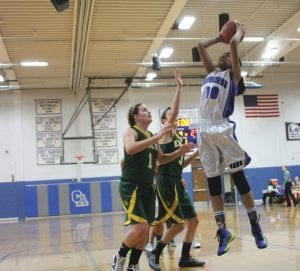 Shakara Johnson goes high for a rebound in a game Dec. 9.

FLINT TWP. — Carman-Ainsworth girls’ basketball is off to a 2-0 start in the Saginaw Valley League-South, including a huge early win against Flushing last week.

The Lady Cavaliers beat the Raiders, 44-42, last Friday to open SVL play, then whipped Flint Northwestern, 64-37, Tuesday night. Carman-Ainsworth, 5-1 overall, is emerging as a leading contender in the league and will take on Flint Powers Catholic in an early showdown for first place tonight at home.

The Lady Cavs made short work of Northwestern, taking a 13-7 lead in the first quarter and exploding for a 28-14 second quarter that gave them a 41-21 halftime command. Carman-Ainsworth coasted from there with a 13-12 third quarter and a 10-4 fourth.

Against Flushing last Friday, Aliah Stinnett and Natalia Kincaid each hit a free throw in the final eight seconds as the Lady Cavs rallied to beat nemesis Flushing. Carman-Ainsworth led 17-14 after one quarter and was still up 27-24 at halftime. Flushing pulled ahead, 34-31, with a 10-4 third quarter, but the Cavs pulled it out with a 13-8 fourth.

Carman-Ainsworth will host Powers Catholic in another Valley game tonight, then is off until a Jan. 3 game at Saginaw Heritage.