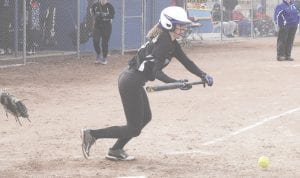 Carman-Ainsworth’s Hannah Thurston lays down a bunt against Kearsley.

Morgan Sherrer registered the Cavs’ only hit in the opener while adding five put-outs. Sarah Roe chipped in with three put-outs.

In the finale, Jada Black and Mykala Brooks each had a hit and Black had four put-outs. Abbigail Pelky, Sherrer and Cherry Smoots totaled two put-outs apiece.

The Lady Cavs dropped both games 11-1 and 15-0 at Flint Powers Catholic last Thursday.

The opener included a hit apiece from Brooks and Tiara Jefferies, while Sherrer had two putouts in center field and Black had three at shortstop.

Roe hit a line drive on a rope into left field in the finale, while Sherrer added two more put-outs from center field. Makayla McDaniels made an excellent catch on the run in left field.

BASEBALL: Carman-Ainsworth was scheduled to host Bay City Western on Monday, but no scores were reported. The View is currently attempting to contact Carman-Ainsworth’s stat-keeper. Please contact Joe Oster at joster@mihompaper.com.

The Cavaliers were at Midland for a doubleheader tonight at 3:30 p.m. — J.O.