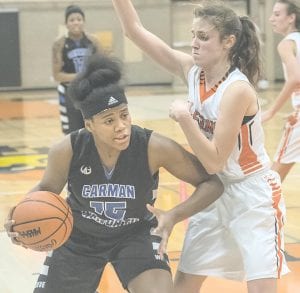 Carman-Ainsworth’s Arie Lewis forces her way to the basket against Flushing on Nov. 28.

FLINT TWP. – The Carman- Ainsworth girls’ basketball team proved to be too much for Saginaw to handle on Tuesday with the Lady Cavs winning 68-19.

The Lady Cavs added a pair of 24-point quarters in the first half to lead 48-12 at halftime. Carman-Ainsworth then went on a 13-3 run in the third and added a 7-4 fourth to seal the win.

The Saginaw Valley League is currently a tight battle with four teams neck and neck while vying for the number one spot. Saginaw Heritage and Bay City Western lead, both undefeated in league play, while Midland Dow and Carman-Ainsworth have one league loss each. Carman-Ainsworth, 9-2, will trav- el to Midland Dow on Friday. 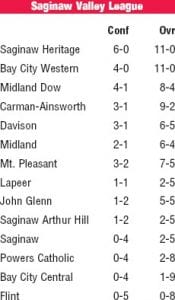