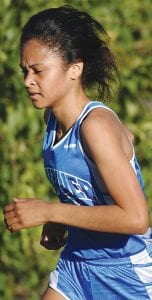 Lauren Foote is seeking her fourth straight trip to the state meet.

FLINT TOWNSHIP
— Carman-Ainsworth hasn’t made much noise at the state cross country finals lately, but for the three straight years the Cavaliers have had Lauren Foote there.

The Lady Cavs’ senior will try to make it four in a row Saturday at the Div. 1 regional meet at Delta College near Saginaw. The top three teams, and any individual finishing among the top 15, will advance to the state meet Nov. 6 at Michigan International Speedway in Brooklyn.

“She’s a very talented runner,” said Carman-Ainsworth girls’ coach David Thrash. “She just has the gift that she doesn’t get very tired when she runs. The secret is, she works very hard, and along with the talent, that hard work makes her a very good runner.”

The 5-foot-8 Foote has flashed that talent at various meets this fall, finishing fifth in the Kearsley Early Bird in 23:22.8, seventh at the Corunna Invitational in 20:23, and fifth in the Chesaning Invite in 20:13.

Her 19:56 in the Big Nine Conference meet has her ranked 17th in the region by athletic.net, five seconds out of the top 15.

The Lady Cavs had 11 girls on the roster all season, but illness and injury have whittled the number to six, who will run at Delta this Saturday.

Dana Cardinal has the best chance at joining Foote in the state meet, but the senior will need all cylinders clicking.

“She would have to run her career race and get a couple of breaks, but she has an outside chance,” said Thrash.

Other Lady Cavs in the race will be Markia Savage, Rani Richardson, Cassandra Pelkey and possibly Devin Willis. That will give the Lady Cavs the required five runners to post a team score, something the boys’ team will not be able to do with just three runners.

The competition in both boys’ and girls’ meets will be rugged, with fourth-ranked Grand Blanc, No. 6 Saginaw Heritage and Big Nine champion Davison in the boys’ field, and No. 8 Midland Dow in the girls’ race.