Lady Cavaliers up record to 10-2 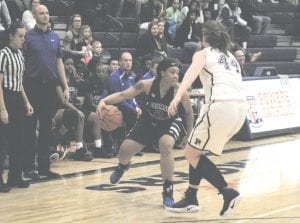 Destiny Strother continues to run the table for the Lady Cavs pouring in 25 points against Arthur Hill and had 17 against Saginaw in the 60-41 win that puts the Lady Cavs at 10-2 on the season.

Carman-Ainsworth was ahead by just three points after the first quarter, 11-8 and Saginaw outscored Carman-Ainsworth 17-12 in the second to take the lead 25-23. The Cavs were having no part of that and put up 23 points to Saginaw’s nine in the third and outscored their hosts 14-7 in the fourth.

In last Friday’s Battle with the Hill, Carman-Ainsworth had the early 10-4 lead after one quarter and increased its cushion to 23-12 by halftime. Arthur Hill tried to hang with the Cavs but to no avail getting outscored 19-12 in the third. They were able to outscore Carman-Ainsworth 18-16 in the final quarter, but it was too little, too late.

A road trip awaits Carman- Ainsworth tomorrow as it travels to Lapeer. — L.P.