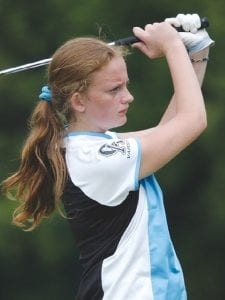 Danielle Sims fired a 114 in the regional.

HIGHLAND
— Their golf season ended as expected in the Div. 1 regional tournament, but the Lady Cavaliers went down swinging last Thursday.

Carman-Ainsworth shot 464 to finish 13th in the 14-team field at Prestwick Village Golf Club, well off the winning score of 348 by host Milford and the runner-up tally of 357 by fellow Big Nine Conference member Davison.

But that was the Lady Cavs’ best 18- hole score of the year, and they had fun shooting it.

“I was really pleased because it was a difficult golf course,” said coach Bob Blaylock. “Some of the fairway bunkers were 150 yards long. But they had a lot of fun playing it and just enjoyed the day.”

Borgerding, a freshman with loads of potential, had a legitimate shot at an individual qualifying berth in her first try. The top three individuals not on the top three qualifying teams moved on to play in the state finals this Friday and Saturday at Eagle Crest on the campus of Eastern Michigan University in Ypsilanti.

But Borgerding’s score was 10 strokes behind the third qualifier.

“I think she’s a year away,” said Blaylock. “Next year she’ll be there.”