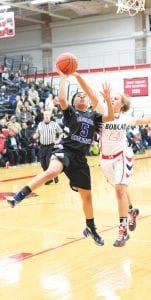 Randi Richardson added 14 points and Harmany Williams and Eriona Lee-Chambers scored seven each as the Lady Cavs took an 11-point lead in the first quarter and held off the Bobcats.

“It was a tough game,” said Carman- Ainsworth coach Lance Belill. “We were able to jump out on them early but Grand Blanc continued to fight back the whole game. We were able to answer with some timely shots.”

Carman-Ainsworth opened its season last Thursday with a 62-32 win at Swartz Creek. The Lady Cavs came out hot, taking a a19-3 first quarter and stretching it to 35-14 at halftime. A physical first quarter saw 17 fouls called, nine on the host Dragons.

Richardson, who sat out all last season with an ACL injury, led Carman- Ainsworth with 22 points, nine in the first quarter. Strother added 19 points and Shakara Johnson grabbed 13 rebounds.