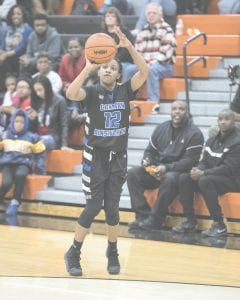 Carman-Ainsworth’s Chenelle King launches one from beyond the arc against Flushing on Nov. 28.

FLINT TWP. – The Carman-Ainsworth girls’ basketball team had a tough week after facing its first losses of the season on back-to-back days. Carman-Ainsworth was also slotted to face Flint on Tuesday, but the game was canceled as Flint did not have enough girls to compete.

Carman-Ainsworth fell to Detroit Country Day on Saturday, 65-59. Carman- Ainsworth took a 26-14 lead after the first and held a 35-31 lead at halftime before sputtering out in the second half and giving up the lead. Detroit Country Day outscored the Cavaliers 14-11 in the third and 20-6 in the fourth.

On Friday, the Lady Cavs were handed their first loss of the season, dropping a 60-44 contest to Saginaw Heritage. Heritage took the lead early on and held on the entire game. Carman-Ainsworth went down 14-6 in the first and 34-14 by halftime. Heritage edged out Carman-Ainsworth in the third, 19-18, but the Cavaliers outscored Heritage 12-7 in the fourth. 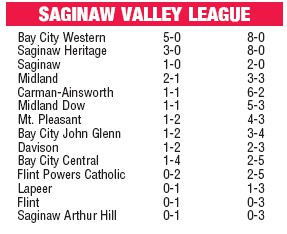 Carman-Ainsworth, 6-2, is at Davison on Friday and Bay City Central on Tuesday.