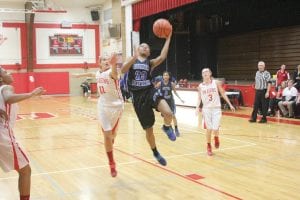 Asjia Blanton added 10 points and Randi Richardson scored eight as the Lady Cavaliers improved to 7-4 overall. The victory began a stretch of six straight road games for the Lady Cavs, who won’t play in their own gym again until Feb. 11.

Carman-Ainsworth edged out to a 13-11 firstquarter lead and bumped it to 26-18 by halftime. Clarkston rallied with an 11-7 third period to pull within 33-29, but the Lady Cavs answered with a 14-10 fourth period to close out the win. Aliah Stinnett and Nariyel Purches added four points each. 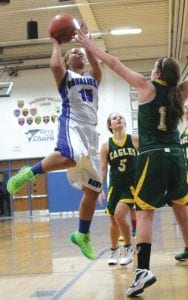 Carman-Ainsworth’s Asjia Blanton goes in for a shot against Lapeer East.

Carman-Ainsworth beat Davison, 55- 50, in a hard-fought Saginaw Valley League-South game Jan. 8 at home. The Cavs trailed 10-8 after one period and 18-17 at halftime, but took a 32-29 lead in the third quarter and iced the victory with an 18-16 fourth. Blanton had 17 points and Proby 16, with each player hitting 8-of-12 shots. Stinnett added six points and five assists, while Richardson had five points and five rebounds and Kincaid five rebounds, four steals and four assists.

The Cavs will return to SVL-South play next Tuesday with a game at Southwestern Academy.