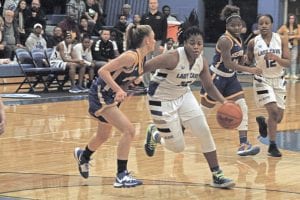 Carman-Ainsworth’s Arie Lewis drives to the basket against Kearsley on Tuesday. Photo by Brandon Pope

FLINT TWP. – The Carman-Ainsworth girls’ basketball team notched a 57-51 win in a back-and-forth battle against Kearsley in the season opener on Tuesday.

The Cavaliers edged Kearsley 12-11 in the first, but Kearsley evened the score at 21-21 by halftime. The Lady Hornets then went ahead 40-38 in the third, however Carman-Ainsworth pulled ahead in the fourth to outscore Kearsley 19-11.

Carman-Ainsworth, 1-0, is at Flushing on Friday.