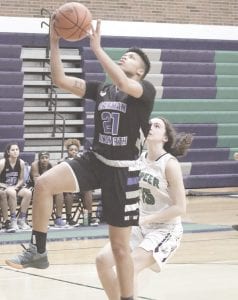 Carman-Ainsworth’s Aaliyah McQueen hits a lay-up in the win over Lapeer on Monday. Photo by Kylee Richardson

LAPEER – The Carman-Ainsworth girls’ basketball team remains undefeated this season after beating Lapeer 54-35 on Monday for its ninth-straight win.

The Cavaliers grabbed a 15-5 lead in the first and never looked back, extending it to 33-13 by halftime. Carman-Ainsworth added to its lead with a 12-10 run in the third, but was outscored 12-9 in the fourth.

Carman-Ainsworth held a narrow 21-20 lead after the first and extended its lead to 42-32 by halftime. The Cavaliers outscored Chandler Park 20-17 in the third. In the fourth, the Eagles attempted a comeback, outscoring Carman-Ainsworth 17-10, but the Cavaliers were able to hold them off.

Aaliyah McQueen set the pace with 20 points and 12 rebounds. Arie Lewis chipped in 16 points, DeDe Smith had 13 and Jessiana Aaron had 12.