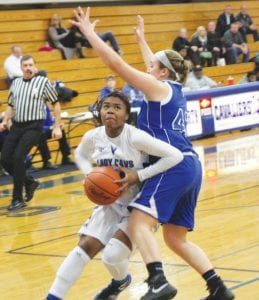 FLINT TWP. – Carman- Ainsworth took a 14-point lead in the third quarter, then held off a Saginaw Nouvel rally in the fourth to beat the eighth-ranked Class C Panthers 67-64 in a non-league girls’ basketball game Tuesday night.

Destiny Strother scored 24 points, including a free throw with 33 seconds left that broke a 64-64 tie. Nakia Earley added two free throws with four seconds to go, and Harmany Williams’ tip steal at the buzzer clinched the win for the Lady Cavs, who avenged a 34-point loss to the Panthers last year.

“Nouvel is a great program,” said Carman-Ainsworth coach Lance Belill. “They handled us pretty well last year; it was our biggest loss.

“But we continue to tell these girls to believe in themselves and it didn’t matter what happened last year. We have a completely different team, and if we buy in on the defensive end we’re going to be OK. That’s exactly what the girls did, in the first half especially. They worked the game plan very, very well.”

The Cavs took a 12-10 first-quarter lead and exploded for 25 points in the second to take a 37-26 halftime lead. Strother hit six 3-pointers in the half, including three in a row midway through the second period to spark the rally.

Randi Richardson added 12 points in the first half, mostly on drives to the basket, and finished with 17 for the game. Earley scored six.

“This is a nice team to have because teams can’t focus on one player,” said Belill. “As soon as they do, we’ve got two or three other girls driving in for a layup and getting 8-10 points a game. It’s huge, and we haven’t had that in the past.”

Carman-Ainsworth stretched its lead to 42-28 in the third quarter and still led 50-39 in the final seconds of the period. But Nouvel senior Laurel Jacqmain hit a 3-pointer at the buzzer, then bombed in two more to start the fourth as the Panthers quickly got back in the game.

A full-court press forced five Carman-Ainsworth turnovers in the final 2:26, and Jacqmain’s layup with 45 seconds left tied it 64-64.

After Earley’s free throws made it 67-64, Jacqmain got the ball and was driving into position for a game-tying 3-pointer at the buzzer. But just as she got to the 3-point line, Williams tipped the ball away from her from behind to seal the win.

Jacqmain led all scorers with 33 points, 18 in the fourth quarter.

Nouvel slipped to 4-3. Carman- Ainsworth is 5-3 and will host Powers Catholic in a key Saginaw Valley League-South game Friday. Powers is an honorable mention team in the first Associated Press Class B poll of the season.

“This is a great win for our program, but we want to keep our emotions down because we have a huge game on Friday,” said Belill. “Powers is bringing in a very nice team.”