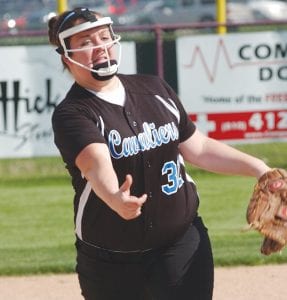 DAVISON — A Big Nine meeting with Davison just didn’t go Carman- Ainsworth’s way as the softball team was shut out, 5-0, and, 17-0, on Monday. Kari Hart took both losses.

Tuesday, the Cavs hosted Saginaw Heritage, which improved to 21-13 on the season after sweeping the Cavs, 10-2, and, 14-1. Kari Hart took the opening loss striking out four, while Jessica McClung swallowed the nightcap loss, also with four strikeouts. The loss drops Carman-Ainsworth to 2-18 on the season.

Last Saturday, the competition was equally stiff at the LakeVille Invite, with the Cavs falling to Lake Fenton, 14-3. Hart again took the loss.

Last Thursday’s game with Holly was canceled and will not be made up with districts starting Tuesday. Today, the Lady Cavs host Swartz Creek of the Flint Metro League.

Swartz Creek hosts the No. 3-1 district with Carman-Ainsworth and Flint Northwestern were issued round-one passes and face off at 10 a.m. on Saturday, June 4. Northern has the bye on the other side of the bracket and gets the winner of Swartz Creek versus Flushing from the Tuesday, May 31 openers. The title is decided at 2 p.m. on June 4.