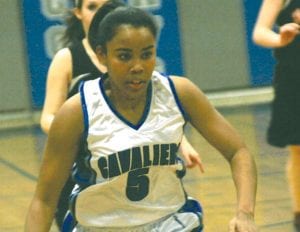 Carman-Ainsworth’s Ashley Hall makes her way towards the basket.

HOWELL— The Carman-Ainsworth girls’ hoops squad won its second consecutive game on Monday, picking up a road victory against Howell, 66-41.

The Lady Cavs forced 39 turnovers in the win, despite only leading by a point in the early minutes of the third quarter, but eventually began to pull away. A run of 11-1 would increase the Carman-Ainsworth lead to 10 points.

After surrendering a comfortable lead in the season-opening heartbreaker against Grand Blanc, Carman-Ainsworth rebounded last Thursday with a big win over Swartz Creek, 70-58.

The story of the night focused on the Cavs’ Hall, who scored a team high 21 points in the win. Hall made eight field goals, and went 5-for-7 at the line. Jones also helped contribute, adding 15 points of her own. Kapri Thompson chipped in 10, while Tomlin put up six.

In last week’s edition, we captioned a photo with the name Jasmine Jones. The players was Aliah Stinnett.