Lady Cavs bounce back with rout of NW 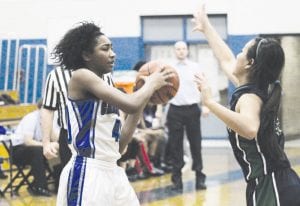 FLINT — Carman- Ainsworth got back on the winning track Tuesday night with a 59-24 win over Flint Northwestern in a Saginaw Valley League-South girls’ basketball game at Northwestern.

Sydnee McDonald poured in 27 points as the Lady Cavs snapped a two-game losing streak and bounced from last Friday’s two-point loss to Lapeer. Natalia Kincaid added seven points and seven rebounds and Shakara Johnson had five points and eight boards. Eriona Chambers also put up five points as seven Lady Cavs broke into the scoring column. McDonald also had eight rebounds and five assists and kept her scoring average at 28.4 points per game through the first five games of the season.

Last Friday, Carman- Ainsworth saw a 13-point first-quarter lead dissolve in a 64-62 loss to Lapeer in the SVL opener for both teams at Carman-Ainsworth. The Lady Cavs led 25-12 after the first period and 41-29 at halftime. But Lapeer got back into the game with a 19-10 third quarter to make it 51-48, then beat the Cavs 16-11 in the fourth.

McDonald had 25 points and Kincaid 17 for Carman- Ainsworth. Johnson scored eight and Chelsey Carpenter had six.

The Lady Cavs, 3-2, 1-1 SVL, will host Davison in another league game tonight.