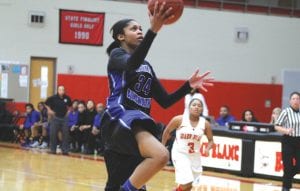 Carman-Ainswoth’s Aliah Stinnett drives to the hoop during Tuesday’s game at Grand Blanc.

Angel Proby poured in 18 points, and eight other Cavaliers broke into the scoring column as Carman-Ainsworth snapped a four-year losing streak to the Bobcats.

The Cavs started slow, taking a 9-7 first-quarter lead, but exploded with a 21-11 second period to take a 30-18 command into the halftime locker room. Grand Blanc edged to within 41-31 in the third quarter, but Carman-Ainsworth closed out the victory with a 10-6 final period. 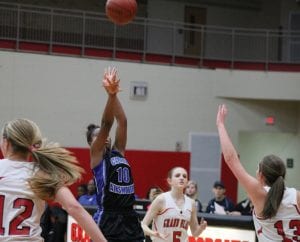 Carman-Ainsworth will visit neighboring rival Swartz Creek for another non-league game tonight and will play its home opener Monday against Lapeer East.