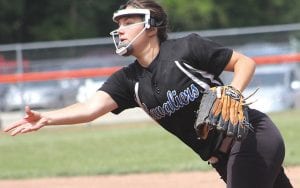 Carman-Ainsworth second baseman Meghan Borgerding underhands a throw to first base to get the runner in last Saturday’s district semifinal game against Clio.

CLIO — Carman-Ainsworth hung tough with Clio for four innings, but eventually dropped a 7-2 decision to the host Mustangs in the Div. 1 district softball tournament last Saturday.

Keri Crane held Clio to two runs through four innings, and the Cavaliers tied the game, 2-2, with two runs in the top of the fourth. Kaitlyn Koegel, Kinterra Tomlin and Kamrin Gold had singles in the rally, and Meghan Borgerding contributed a sacrifice.

Clio then erupted for five runs in the bottom of the fifth to pull away for the victory. The Mustangs, 23-16, went on to lose the district title game to Swartz Creek, 9-1.

Crane also had two hits for Carman-Ainsworth, which ended its season at 5-28. The Cavaliers had lost a doubleheader to Clio during the regular season, 3-1 and 8-0.

Swartz Creek beat Flushing, 5-4, in the other semifinal. Flushing ended at 23-15. The eighth-ranked Dragons, 33-6, advanced to the regional at Saginaw Valley State University, where they will play the winner of the Bay City Western district at noon Saturday.