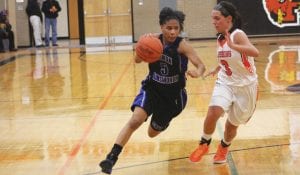 FLUSHING – Carman-Ainsworth ran into longtime rival Flushing on Tuesday night and dropped a 54-34 decision to the Raiders in a non-league girls’ basketball game at Flushing High.

The Lady Cavs and Raiders played for 29 years together in the Big Nine Conference and Saginaw Valley League but met for the first time as non-league opponents Tuesday.

A Flushing team with no seniors dominated the reunion, jumping out to a 19-7 first-quarter lead and stretching it to 32-16 at halftime and 47-22 through three quarters.

Sydnee McDonald led Carman- Ainsworth with 15 points, but they were hard-earned and well below her season average of 25.3 per game. Natalia Kincaid scored seven. Junior center Clare Glowniak led Flushing with 18 points.

Last Friday, Carman-Ainsworth succumbed to a second-half Powers Catholic rally and lost to the Chargers 68-60 in a Saginaw Valley League- South game at home. The Lady Cavs led 33-26 at intermission but fell behind 49-48 going into the fourth quarter. Powers’ 19-12 fourth closed out a 42-27 second-half comeback.

The game matched up two of the best players in the area. Carman-Ainsworth’s McDonald scored 28 points, while Powers’ Francesca Coury tallied 34. Kincaid added 15 points, Chelsey Carpenter scored eight and Harmany Williams had seven for the Cavs.

Carman-Ainsworth was coming off a tough non-league game Thursday night in which the Cavs fell to Saginaw Nouvel 67-33. It was only 24-20 at halftime, but Nouvel exploded for a 43-13 second half.

Shakara Johnson led Carman- Ainsworth with 13 points, while McDonald was held to a season-low 12.

The Cavs, 5-5, will return to SVLSouth play Friday with a home game against Flint Southwestern Academy.

Juwan Evans led the Cavs with 14 points and four rebounds, and Jaylen Bradley had 13 points and nine boards.

Last Friday, the Cavs controlled much of the first three quarters but dropped a 48-46 decision to Flint Powers Catholic in a Saginaw Valley League-South game at home. Carman-Ainsworth jumped out to an 8-0 lead and was up 23-15 at halftime. The Cavs still led by nine midway through the third period, but Powers pulled within 32-28 by the end of the quarter and won it with a 20-14 fourth.

The Cavs will visit Flint Southwestern Academy for another SVL-South game Friday.