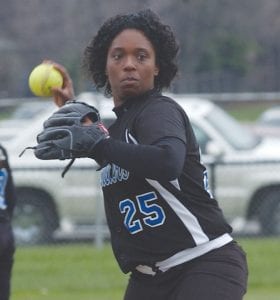 Carman’s Kinterra Tomlinson showed no fear in a throw to the bag.

FLINT — The Carman-Ainsworth soccer team got off to a slow start this season, but has been playing better as of late. Owosso came to town on Monday and the Lady Cavaliers eked out a 2-1 decision.

Owosso scored the only goal in the first half, but Carman would fight back. Aiana Jamison tallied the Lady Cavs’ first goal from Jasmine Rodriguez. With under five minutes to play, Amber Richard notched the game-winner.

“It was a close game and we were low on players for multiple factors,” said Carman coach Jessyca Mathews. “I am proud that we were able to push through the obstacles we have had in the current week and were able to take the win.” 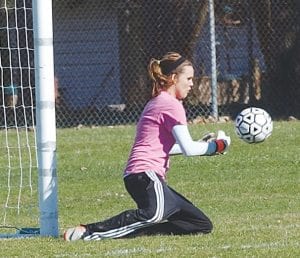 Carman-Ainsworth goalie Savannah Lacey made a save in net during a recent game.

Richard led the way with three goals and one assist while Jasmine Jones scored two goals with two assists. Courtney Glinka, Maggie McCann and Jamison added one goal each and Monica Townsend chipped in with one assist.

Last Wednesday, Carman hosted Big Nine rival Flushing and dropped a 4-1 decision. Jones put the Lady Cavs ahead early, but the Raiders scored four straight goals to put the game out of reach. Morgan Miles scored two goals for Flushing while Hailey Varney and Brianne Miarka added one each.