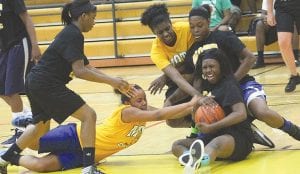 FLINT — Montreca Mull and Ashley Hall played together all winter as members of the Carman-Ainsworth girls’ basketball team, but they were determined enemies last Thursday in the Bruin Club All-Star Classic at Mott Community College.

Mull played for the winning team, scoring four points to help the Black squad post a 38-33 victory over the Gold team. Hall got her bragging rights in the scorebook, popping in nine points for the Gold, including a long three-point bomb at the halftime buzzer to pull her team within 22-20.

Being former teammates meant nothing in this contest, as the two Lady Cavs played hard against each other, most notably in a scramble for a loose ball late in the game.

Both teams were short-handed, as only 11 of the 19 players on the rosters showed up for the 6 p.m. tip at Ballenger Field House. That meant a six-player Gold team took on a fiveplayer Black squad for the scheduled 40-minute game. In deference to the players’ safety in the warm gym, the contest was shortened to two 15-minute halves, with a running clock in the first half and plenty of timeouts in the second.